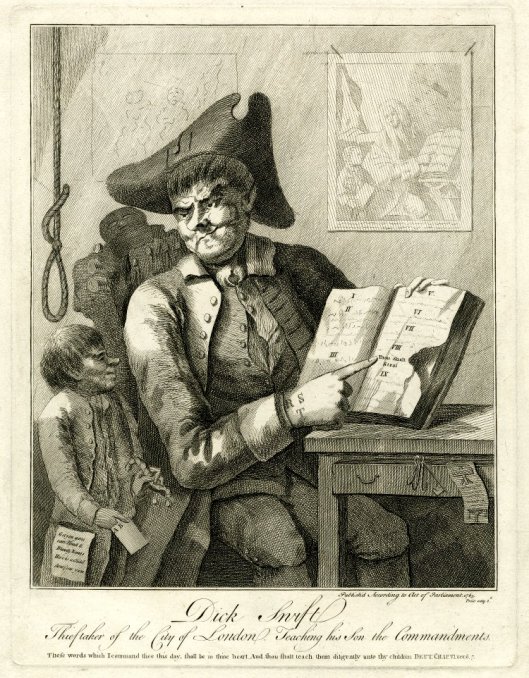 Perhaps rather oddly for a medium which was otherwise concerned with high politics and high society, there was an notable link between eighteenth-century London’s satirical print trade and the reporting of crime. Caricaturists, who were noted for their ability to quickly capture accurate likenesses, and typically cheaper to employ than ‘proper’ artists, were frequently dispatched to make courtroom drawings of noted felons. These images were then engraved in prints which were sold to rich and poor alike, such was the desire for news of lurid and extraordinary across all levels of Hanoverian society.

The fantastically named Dick Swift was one of those criminals fortunate enough to have his image preserved for posterity at the hands of a satirist. The print Dick Swift, Thieftaker of the City of London. Teaching his son the commandments was published anonymously in 1765 with copies being sold at a shilling a piece. The print was evidently popular enough to prompt lower quality imitations, a example of which survives in the British Museum collection, that were presumably sold to less affluent consumers at a reduced price. The image is a parody of Robert E. Pine and James Watson’s mezzotint Arthur Beardmore, Common-Council Man of the City of London, Teaching his Son Magna Carta, which had been published by Robert Sayer 20th May 1765, a copy of which has been loosely delineated on the wall behind Swift.

Conflicting accounts of Swift’s life were published in the decades after his death, but the most convincing of these suggest that he was born into a poor family living somewhere in the vicinity of St Luke’s Church in Old Street. He was apprenticed to a turner at an early age but gradually drifted into a life of heavy drinking and petty crime. He sweet-talked his way into a job as a publican, managing the Coach & Horses public-house in Shoreditch, which he quickly transformed into a major clearing house for stolen goods. Swift was eventually apprehended in May 1764, when a thief who had been caught taking goods from the back of a wagon parked outside a public house in Aldgate turned King’s evidence against him. He was sentenced to be transported to the colonies for a period of 14 years, but spent no more than a few months in America before absconding aboard a ship bound for Liverpool. He was eventually apprehended and transported from London again on 24th April 1765, from whence he sailed into historical anonymity.

One source suggests that Swift had obtained the title ‘thief-taker’ as a result of his association with a notorious gang of thief-takers with whom he associated in order to avert attention from his own criminal practices. However, it’s also possible that the title was awarded ironically, in reference to Swift’s willingness to take stolen goods with no further questions asked.

The print shows Swift sitting at a table holding a tattered copy of the Bible open to reveal the ten commandments. The page containing the eighth commandment has been ripped so that the text now reads “thou shalt… steal”. An instruction which his equally sly looking son immediately acts upon by relieving his unsuspecting father of his handkerchief. The pair are surrounded by symbols associated with crime – a set of lockpicks hangs from the draw along with a schematic of a set of stocks, a noose also hangs behind them. The boy holds a slate on which he has started to write out the alphabet, the task seemingly being abandoned after he has reached the letter ‘B’. The phrase “Get you gone Raw Head & Bloody Bones. Here is a child don’t fear you” are engraved on a piece of paper which hangs from his pocket. Raw Head & Bloody Bones was a bogeymanlike figure typically used to scare children into obedience. The reference here therefore conveys the sinister message that Dick Swift Junior fears nothing and is consequently prepared to do anything. The image undoubtedly speaks to middle class fears about the morals and behaviours of the poor in a way which unfortunately still resonates with modern tabloid news reporting.