This interesting creamware jug caught my eye whilst browsing through some auction catalogues this week.

It’s 15cm high and probably dates to circa 1815. The body is decorated with two transfer-printed designs. The first and most substantial of these is a caricature entitled The Up Shut or Bonny-Fire. It depicts Napoleon, bound and gagged, hanging from a gallows above a pile of combustible materials to which John Bull is about to set light. The following text has been crudely etched into a speech bubble above John’s head:

Fore George! You’ve quieten’d him, He’s made a stir in’t world long enough, now’s my turn. I’ll stir him when my fire lights.

Whilst most satirical designs which appear on creamware during this period were copied from printed caricatures, I’ve been unable to identify a source print for this image. Therefore, I can only assume it’s either an original image created by the potter, or that it has been copied from a print which has subsequently been lost to history.

In contrast to the scene of gleeful immolation displayed on this side of the pot, the obverse is decorated with a nice bunch of flowers. 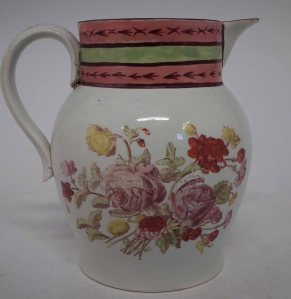 The name of the artist-engraver W. Newman appears on a handful of satirical lithographs published in London during 1834-35. These works have previously been attributed to William Walker Newman (1817 – 1870), an artist who would go on to provide illustrations for the early editions of Punch before emigrating to America to pursue a career as a political satirist [1]. Assuming this attribution is correct, Walker’s early plates, produced whilst he was still a teenager, remain uncatalogued in any of the major institutional collections of British satirical prints [2]. This post therefore aims to address that deficit by providing a brief summary of these works.

One of the earliest plates to appear carrying Newman’s name was Female Emigration! which was published by G.S. Tregear of Cheapside in October 1834. The print mimics the style of C.J. Grant’s Every Body’s Album & Caricature Magazine, a popular fortnightly broadsheet of caricatures and scraps published by John Kendrick (and latterly Thomas Dawson) of Leicester Square, and presents a wholly unflattering view of life in Britain’s Australian colonies.

also published by Tregear. The design was once again adapted from earlier works by C.J. Grant, in this case the Frontispiece for the Penny Magazine of the Society for the Diffusion of Useful Knowledge Vols. 1 & 2 which were published by Edward Lacey and  George Purkers respectively. The latter plate is dated 9th May 1833 and it is possible that Tregear hired Newman to produce his derivative version around this time, although the satirical frontispiece remained a popular trope in Grant’s work throughout the mid-1830s and the print could conceivably date from any point between 1833 and 1835.

substantial product of Newman’s short-lived collaboration with Tregear. The project appears to have been conceived as a rival to the aforementioned Every Body’s Album… with the publication dates seemingly calibrated to ensure that each edition was issued a few days before Grant’s magazine. The four plates in the series are dated as follows: No.1 October 15th 1834, No.2 October 29th 1834, No.3 November 12th 1834 and No.4 November 26th 1834 [3].

Humour and Rum Jokes, two long-running series of humorous lithographs published by G.S. Tregear over a number of years between c.1832 – 35. It’s not possible to quantify the extent of Newman’s contribution to either series, because the prints were normally issued without a publication date or artistic attribution. However it seems reasonable to assume that his involvement coincided with the period in which he was working with Tregear on the prints outlined above [4].

“Wholesale Periodical & Caricature Shop” at No. 16 High Street, St Giles. This print is the most interesting of the two, being executed in a style which so different from that of Newman’s other works that it could almost be by a different hand altogether. Although the print is a lithograph, it has been etched in the manner of a copperplate engraving and is made up of deep lines that have been hastily scored into the stone. There are also numerous spelling and engraving errors in the text which have not been corrected prior to publication. The overall impression is of an artist working at speed on a low-budget product which was bound for an audience drawn from the bottom end of the market for printed images.

© Mathew Crowther and The Printshop Window, 2018. Unauthorized use and/or duplication of this material without express and written permission from this site’s author and/or owner is strictly prohibited. Excerpts and links may be used, provided that full and clear credit is given to Mathew Crowther and The Printshop Window with appropriate and specific direction to the original content.

via Exhibition | Pots with Attitude: Political and Satirical Prints on Ceramics — Enfilade