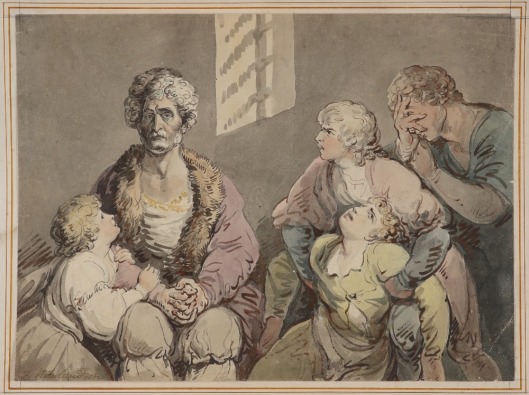 If one were to imagine the sort of painting likely to capture the imagination of the caricaturist Thomas Rowlandson then it’s unlikely that Sir Joshua Reynold’s Count Ugolino and his Children in the Dungeon would be the first image to spring to mind. Rowlandson’s obvious love of bawdy humour and scenes of convivial sociability seems at odds with this rather austere meditation on suffering and death. However, it is precisely that fact which marks out this pencil and watercolour painting as something a little bit special. For it is likely that when Thomas Rowlandson sat down to sketch out this picture, all of that – the caricatures, the teeming street scenes, the raunchy erotica – still lay ahead of him. Because in all probability he drew this image when he was still a 15 or 16 year old boy studying at the Royal Academy of Arts.

Given the arc of Rowlandson’s subsequent career as an engraver of humour prints (not to mention illegal pornography), it’s sometimes easy to forget that he also pursued a very successful career as a serious artist. His watercolour landscapes found their way into some of the finest collections in the land and were a direct influence on the early work of J.M.W. Turner. He also possessed impeccable artistic credentials – not only being one of the few caricaturists to have studied art at the prestigious Royal Academy School but to also succeed in winning a place there at the unusually young age of 15. The Academy had been founded by King George III four years earlier in 1768 in an effort to raise the status of British art to a level that was commensurate with the nation’s economic, maritime and colonial power. This was to be achieved both by the education of young artist and the staging of an annual exhibition of works by great Academicians – including Reynolds who was appointed to act as its first president.

The Academy School was based in Old Somerset House on the Strand. The academic programme began with the study of portraiture and Rowlandson and his fellow pupils would have spent their days drawing objects from the  extensive collection of plaster copies of antique statuary that was housed in the building. When not engaged in formal study under the supervision of a master, pupil’s were encouraged to busy themselves by copying works which hung in the Academy’s exhibition rooms in Pall Mall. It is almost certainly here that Rowlandson would have first set eyes on Reynolds painting of Count Ugolino. Rowlandson arrived at the Academy on 6th November 1772 and Reynolds unveiled the painting at the opening of the annual exhibition five month later. If Rowlandson took his sketch from direct observation of the original then it must have been completed before 1775, when it was sold to the Duke of Dorset for the princely sum of 400 guineas (apparently it was a shrewd investment – Dorset would later claim he had been offered £1,000 for it). [1.]

The painting depicts an obscure episode in the bloody history of medieval Italy. Count Ugolino was a Pisan nobleman who was ousted from power following a coup orchestrated by his arch-rival Archbishop Ruggieri. Ugolino and his sons were confined to a locked room at the top of a high tower in the city and there they were left to starve to death on Ruggieri’s orders. The incident would probably have vanished into the footnotes of history were not for the fact that it was recorded for posterity by the poet Dante in The Divine Comedy. Dante places Ugolino and Ruggieri in the Circle of Hell reserved for traitors, with the Archbishop being judged to be the worst of the pair and therefore forced to endure the pain of having his rival gnaw hungrily at his head for all eternity.

Reynolds painting shows Ugolino staring out at the viewer in helpless anguish as the first of his children succumbs to hunger. It’s a striking image and a radical departure from the society portraits that he was more commonly known for. As a consequence, the cognoscenti’s reaction was decidedly mixed. While The Public Advertiser acknowledged that it was “a good picture” it also felt it necessary to add that “if the same Excellence had been employed on a pleasing Subject, it would have inchanted [sic], as it may now terrify, the Public.” The Morning Chronicle on the other hand regarded it as a work which was utterly without merit and described Reynolds efforts as “the rude disorderly abortions of an unstudied mind, of a portrait painter, who quitting the confined track where he was calculated to move in safety, had ridiculously bewildered himself in unknown regions.” [2.]

Nevertheless, Reynolds and his fellow Academicians regarded history painting as the highest form of art and it’s entirely possible that Rowlandson and his fellow pupils were instructed to make careful copies of Count Ugolino… when it was put on display. The choice of subject matter certainly strengthens the case for this being an early work, as by the 1780s Rowlandson was already beginning to drift away from the classical and Italianate ideals of the Reynolds and his fellow Academicians. In 1783 he pointedly declined to submit any paintings for the Academy’s annual exhibition and instead put forward four drawings for inclusion in a display by the rival Society of Artists, a body which promoted a more vernacular style of British art in keeping with the manner of William Hogarth and Joseph Wright of Derby. It therefore seems hard to imagine Rowlandson devoting time and effort to copying Reynolds’ picture after this date. It therefore stands as an exceptionally early example of Rowlandson’s work and one which is most definitely worthy of note.