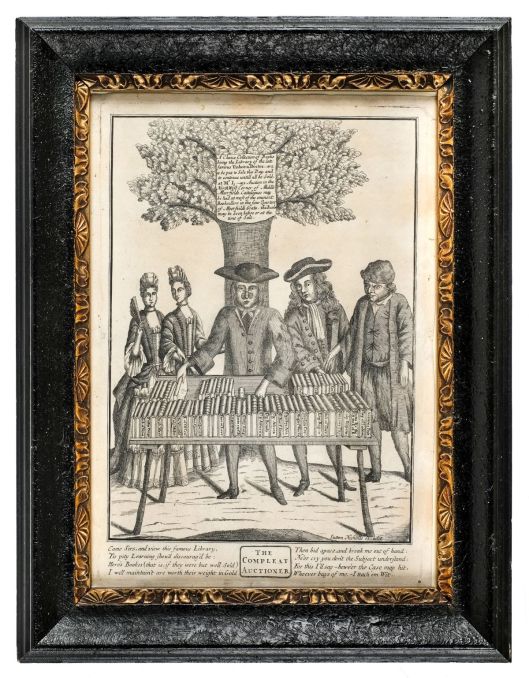 We make a rare foray into the world of early eighteenth-century graphic satire for this post on an engraving by Sutton Nicholls which has popped up at auction recently.

Nicholls was active in the London print trade from 1687 until his death in 1729, operating from a variety of premises centred in and around Aldersgate Street in the City of London. He began his career as an engraver of maps and globes but the scope of his work eventually expanded to include topography, portraiture, various forms of printed ephemera (such as tickets and medley prints) and satire. On a business card dating to c.1720, he described himself as an engraver of “all sorts of Pictures viz. History, Perspective, Architect, Gardening & Landskip [sic] & c. Maps, Sea-Charts, Mathematical Schemes, Writing Flourish’d Pieces, Shop-bills, Tobacco-marks &c. He also cuts on Wood or Metal for Book-printers or Book-sellers, Seals, Stamps & Plate.”

The Compleat Auctioneer is a satire on the then still comparatively recent phenomenon of book auctions. The  first book auction took place in England in 1676 and they subsequently became a popular means of buying and selling books. The practice of offering second hand books for sale at a reduced price inevitably attracted snobbish criticism from conventional booksellers and aristocratic bibliophiles, who regarded the auctioneers as hawkers who devalued the monetary and cultural value of everything they touched. The scientist Robert Hook was horrified to find books by Robert Boyle being offered for sale at an auction in Moorfields, regarding it as an insult to the works of his great friend and patron. Moorfields itself was to acquire a reputation as the home of printers, publishers and booksellers operating at the bottom end of the market and its lack of status amongst serious book-collectors is reflected in the fact that Hooke barely makes a single reference to the area in his otherwise extensive notes on the London book trade in this period [1].

A book auctioneer is shown standing behind a stall of books with a small crowd of customers gathered about him. Behind him is a tree in which a sign has been hung that reads: “A Choice Collection of Books being the Library of the late famous Unborn Doctor, are to be put to Sale this Day and to continue untill [sic] all be Sold, at Mr L-GS Auction in the North West Corner of Middle Moorfields. Cattalogues [sic] may be had at most of the eminent Booksellers in the four Quarters of Moorfeilds [sic] Gratis, the Books may be Seen before or at the time of Sale” Two columns of text beneath the image on either side of the title mimic the auctioneer’s sales pitch, mocking him and his parvenu clientele: “Come Sirs, and view this famous Library, ‘Tis pity Learning shou’d discourag’d be: Here’s Bookes (that is, if they were but well Sold), I will maintain’t are worth their weight in Gold. Then bid apace, and break me out of hand: Ne’re cry you don’t the Subject understand: For this I’ll say – howe’er the Case may hit, Whoever buys of me – I teach ’em Wit.”

The titles of some of the books are visible and the British Museum’s Online Catalogue identifies a number of them as being genuine contemporary works with which Nicholls customers would presumably have been familiar.