The arrest and trial of the Anglican clergyman Dr Henry Sacheverell was to prompt the first great outpouring of printed graphic satire in early eighteenth-century London. This incomplete sheet of uncut playing cards was just one item among over 600 pamphlets, broadsides and prints known to have been published on the affair, with many of the images of Sacheverell also being transferred for decorative use on buttons, fans and snuff boxes.

Sacheverell was chaplain of St Saviour’s church in Southwark and on 5th November 1709 he was invited to deliver a sermon from the pulpit of St Paul’s. 5th November was Gunpowder Day, a semi-official holiday given over to remembrance of the

thwarted Gunpowder Plot of 1605, and Anglican sermons were typically devoted to the vilification of the nation’s Catholic enemies at home and abroad. On this day however, Sacheverell had other ideas. He began his sermon in the usual fashion but proceeded to skim over the evils of Catholicism with almost indecent haste, devoting just a few minutes to Popery and the remaining ninety minutes of his speech to a lengthy and heated attack on the civil and ecclesiastical authorities. Exploiting a mood of popular disillusion with the Whig junta which had seemingly ruled in perpetuity since the Revolution of 1688, and with Britain’s continued involvement in the bloody quagmire that characterised the middle phase of the War of Spanish Succession, Sacheverell warned the congregation that they were the victims of a vast conspiracy to deprive them of their faith and freedom. The government was deliberately flooding London with foreign immigrants, he claimed, in order to increase the number of Whig-supporting Protestant dissenters and thereby establish an absolutist Whig government which would finally overturn the Church of England.

Sacheverell’s savage attack touched a nerve among a public that had grown heartily sick of the Whigs and copies of the sermon were soon being printed and sold in considerable quantities all over London. The government responded with equal ferocity, arresting the renegade chaplain, throwing him in jail and impeaching him on a charge of high crimes and misdemeanors against the state. The trial which commenced in Westminster Hall on 27th February 1710, generated enormous public interest and Sacheverell’s coach was mobbed by cheering crowds as he was transported back and forth from his jail cell each day.

Printed images of the Reverend Doctor were sold to countless Londoners who saw his arrest as further confirmation of the existence of a political conspiracy aimed at stamping out liberty and the established church. Although Sacheverell was eventually found guilty the relative leniency of the sentence – a three year ban on preaching and a public burning of his sermon – was judged to be a tacit endorsement of his words and thus a moral victory by his supporters among the mob. The conclusion of the trial on 21st March 1710 was marked by several days of severe unrest, in which Tory mobs rampaged through London and sacked and burned several dissenting chapels. Although the military was called in and calm eventually restored to the city’s streets, the incident evaporated what little credibility the government had left and an election later in the year finally swept the Whigs from office.

London’s engravers rushed to meet the demand for Sacheverell memorabilia, with Philip Overton, George Bickham the Elder and George Virtue all producing high quality mezzotint copies of Thomas Gibson’s oil on canvas portrait of this latter-day martyr of high Toryism. These expensive high-end prints were accompanied by a slew of cheap copies which proved to be so popular that many printsellers felt the need to take out advertisements pleading with potential customers to resist the temptation to purchase lesser versions which were “imperfect copies, and not taken from the [original] painting”. Even Continental printmakers got in on the act, with Dutch engravers such as Peter Schnek producing copies after Gibson for export to the British market. By the winter of 1710 Sacheverell’s image was thought to be virtually ubiquitous amongst ordinary Londoners, with the writer William Bisset noting that “nine parts in ten of the public houses, whether taverns, ale-houses or bawdy shops, are staunch conformists; and most of them have the Doctor’s picture in their chief dining rooms and some, I have seen, his sign at their doors”.

This sheet of cards illustrated with scenes from Sacheverell’s life was published anonymously sometime during 1711. The complete deck must originally have been issued in two parts, with surviving examples of the black suits being much rarer than the red cards shown here. Indeed, it took the British Museum over 30 years to acquire a copy of the sheet carrying the clubs and spades and as such they are not listed in the original published version of the Museum’s catalogue. Each card carries an engraved image, a suit and value marking and a set of rhyming couplets. The British Museum catalogue describes them as follows:

Two – Sacheverell in a coach cheered by the crowd

Four – He is entertained at a formal dinner

Six – Sacheverell is acclaimed by the poor in Wales; goats climb a mountain

Seven – The Lord Mayor of London, Sir Samuel Garrard, delivers a copy of Sacheverell’s sermon of 5 November to Henry Clements, the printer

Nine – He is received outside a college, presumably Magdalen where he was educated

Ten – He is instituted to the living of Selattyn by William Fleetwood, Bishop of St Asaph

Ace – Sacheverell approaches the pulpit to give his famous sermon 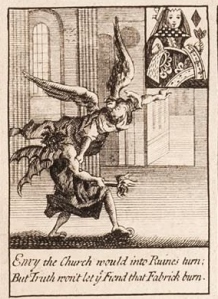 Eight – She directs the Earl of Rochester to take the chair as President of the Council; he was to die in May 1711 and be replaced the Duke of Buckingham

Nine – Sacheverell address an audience from a platform

Ten – The Queen appoints and dismisses ladies in waiting

King – A female personification of the Church of England sits on a rock attended by bishops with Sacheverell kneeling in front of her; winged boys hold a church above

Early English satires such as this are rare and illustrated cards will also appeal to a secondary market of gaming memorabilia collectors, meaning their market value tends to be quite high. These cards sold at auction in London earlier this week for an impressive £1,400, a complete deck in its original uncut state would therefore presumably fetch somewhere in the region of £3,000 – £4,000.

A very quick post to share this image of an extremely rare French satirical medal which is being offered for sale at an auction on the Continent.

Tokens, coins and medals carrying satirical designs were produced in France and England from the late 1780s onwards but really came into their own during the early years of the French Revolution, when they were seized on by activists at both ends of the political spectrum as a cheap and durable medium for propaganda. This was true of France in particular, where the existing market of private collectors was supplemented by official commissions to produce large quantities of tokens on behalf of the various revolutionary juntas.

This example is so unusual because, instead of being minted onto a standard copper or lead token, it has been pressed into a piece of polished leather. The decision to manufacture in leather may have been motivated by a desire to ensure that it remained affordable to even the most impoverished sans culottes, or it could have been a deliberate ideological move intended to distinguish revolutionary tokens from the bourgeois collectors items of the ancien regime. Leather may also have been used because the requisitions of base metals for arms manufacture that followed the deceleration of the Levee en Masse in August 1793, made their use uneconomical.

The token was probably struck to commemorate the Festival of Reason that took place in Paris on 20 Brumaire Year II (10th November 1793). The Festival was orchestrated by the Hébertist faction within the National Convention as a means of strengthening public support for the policy of de-christianisation. The cathedral of Notre Dam, recently cleansed of its ancient symbols of church and monarchy and now dubbed ‘The Temple of Reason’, provided the setting for a public parade featuring actresses playing the goddess of reason and her retinue, and a donkey dressed in a bishop’s robes and mitre. The design shows the reverend ass trampling the symbols of the Catholic church under the headings “Death to Fanaticism and Superstition”, while the obverse depicts Liberty and Death (or possibly Time) standing under the newly sanctified image of the phrygian cap.

The Wonderful Mill must rank alongside the Tythe Pig as one of the most commonly used satirical tropes of the mid-to-late eighteenth-century. Variations on the theme of a machine capable of reversing the aging process appeared in multiple print editions published between the 1770s and early 1800s and the design was taken up and reproduced extensively on all manner of printed creamware pottery. 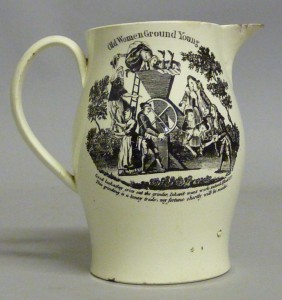 The Mill’s origins are unclear, although similarities between the central image of the giant crank-powered grinding machine and Dutch satires published in the wake of the Peace of Utrecht, raises the possibility of later British editions being based on an older Continental template. The earliest known reference to the design comes from Sayer & Bennett’s 1775 catalogue, in which Old Women and Old Men Ground Young is listed alongside “moral and instructive Emblems for the entertainment of Children – Commonly called TURN-Ups”. The image’s subsequent adaption for use in adult satire chimes with the theories that Marcus Wood has advanced about the links between children’s illustrations and radical satire in the Peterloo era, and suggests that it may be possible for historians of print to extend the chronological and thematic scope of Wood’s theories in future. This change of audience also presumably coincided with the production of a slightly saucier variant of the design (right), in which a crowd of young men waits to canoodle with the batch of freshly milled young lovelies .

The design proved particularly popular with potters, so much so that ceramic versions of the image are now far more common than their printed counterparts, and it is known to have been used on a variety of creamware goods including mugs, plates, jugs and teapots. At least two major variations of the image were produced for use on pottery; a tamer version in which the young men and title are omitted (left), which carries the verse: “Good lack how wonderful to view it / I neer believd it till I knew it / Come here ye toothless lame & Grey / Come & be Ground without delay”; and another entitled Old Women Ground Young which is accompanied by the rhyme: “Good lackaday, cries out the grinder / I shan’t want work, indeed I find Sir / This grinding is a bonny trade, my fortune shortly will be made.” Multiple adaptations of the image also appeared in print, with the British Museum holding two particularly interesting examples of the design from the early 1800s, the first being produced by the thirteen year old George Cruikshank for a set of children’s illustration and the second satirising Mary Ann Clarke’s ability to ‘grind’ humble tradesmen into senior army officers.