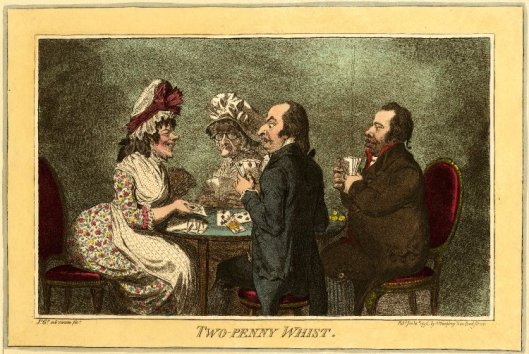 James Gillray, Two Penny Whist, 1796. The two ladies at the table are said to be portraits of Hannah Humphrey (r) and her housemaid Betty (l). Despite her somewhat decrepit appearance, Mrs Humphrey would have been about 55 at the time this print was published.

I am exceedingly concerned that your excellent partner is so ill still, & I am very sorry not to have your assistance at my sons house; but would you not for one month come when the last coast of painting is to be given, & I would send you every Saturday home & you might return again on the Monday morning, which should be no expense to you & your pay the same as if you stay’d the whole week. I hope you will be able to assist me in this way, without any distress to poor Mrs Gillray who has my best wishes for her health & welfare & I am ever.

My first thoughts on reading this letter in the British Library a few weeks ago were: “Partner? Poor Mrs Gillray? Since when did James Gillray have a wife?!” The apparent  existence of a ‘Mrs Gillray’ was not only something that I had not seen mentioned anywhere else before, it also directly contradicted numerous biographies which stress that Gillray was a bachelor. Could it really be the case that generations of historians have overlooked Mrs Gillray?

Well, maybe. If we could prove conclusively that Gillray had been married at some point during the 1790s then it would constitute a significant revision to the accepted historical narrative of his life, but there are a couple of other plausible explanations for this contents of this letter:

James Gillray the caricaturist lived with his father, who was also called James, until the latter died in the spring of 1799. As James Gillray senior definitely was married, it is possible that the letter was addressed to him rather than his son. The fact the letter was addressed to Mr Gillray the painter could perhaps mean that either Gillray’s father had embarked on an art career of his own, or that the term was being used in its most pedestrian sense and referred to a decorating job of some sort?

Unfortunately neither of these theories holds much water. James Gillray’s father was elderly man who made his living cutting the grass and tending to the graves in the small Moravian cemetery behind the family’s house. The idea that he also had a secret career as an artist, and was flitting off to country houses for the weekend, seems too implausible to warrant serious consideration. Conversely, while it’s conceivable that Sir James Wright may have needed to get a tradesman in to do a spot of decorating, it seems utterly improbable that he would have gone to such extraordinary lengths to secure the services of a crippled old soldier.

Although James Gillray wouldn’t end up cohabiting with Hannah Humphrey until after his father’s death, we know that the two were friends for a number of years before this. It’s likely that the friendship was purely platonic, but to outsiders it may have seemed as though the two were involved romantically, and they may have been the source of some gossip among London society. It’s not beyond the bounds of reason to imagine a scenario in which Sir James Wright mixed up a report that Hannah Humphrey was unwell with some of this gossip and assumed that she and Gillray were husband and wife.

3. “Mrs Gillray” was the caricaturist’s mother.

The only woman with whom Gillray is known to have shared a house, apart from Hannah Humphrey, is his mother Jane. We know virtually nothing about Jane Gillray, other than the date of her wedding and those of the baptisms of her three children. It is almost certain that she passed away sometime before 1798, as a letter written by Hannah Humphrey in that year describes a visit to see Gillray’s father when he was clearly living on his own. It is therefore possible that it was Jane Gillray who lay on her sickbed in the spring of 1797 and that it was concern for his mother, rather than a non-existent wife, that made the caricaturist reluctant to take on a commission from Sir James Wright. There is some evidence which may help substantiate this theory: the non-conformists register of births, marriages and deaths records that a 77 year old lady named “Jean Gillray” died in London in 1797. The age and religious affiliation certainly make this a likely candidate for Jane Gillray, the Christian name presumably being misspelled in the original record of incorrectly transcribed when the archive was digitised.

Perhaps Sir James Wright received some news that Mrs Gillray was sick and incorrectly assumed that it was Gillray’s wife, rather than his mother, who was unwell? This would be a perfectly reasonable assumption to make, given that Gillray was 42 years old at the time.

Of course, it’s also possible that the contents of the letter are entirely accurate and that Gillray was married. If his wife was sick in 1797 then she must have succumbed to the illness and died before Gillray moved in to the room above Mrs Humphrey’s printshop two years later. While there’s no other evidence to substantiate this theory, it can’t be entirely dismissed out of hand. We know Gillray had a mother and a younger sister, but know next to nothing about them apart from their names. Given the paucity of surviving evidence relating to the caricaturist’s private life, it’s not certainly not impossible that the existence of a wife could have passed virtually unrecorded.

Personally, I think scenario three is the most plausible explanation, but until some starling new piece of evidence turns up then I think we are just going to have to keep guessing.

1 thought on “The Mysterious Mrs Gillray”