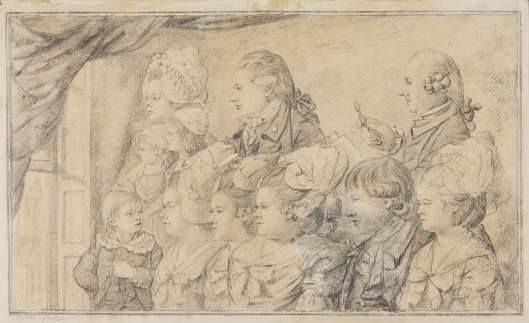 A large collection of original works by the caricaturist Robert Dighton came up at auction in London earlier this week. All of the items were formerly part of a collection of prints, paintings and drawings by various members of the Dighton family that

belonged to a collector named David Padbury. In 2007, Padbury produced a short catalogue raisonné of Dighton’s work to accompany an exhibition at London’s Cartoon Museum. The book, entitled A View of Dighton’s The Dighton Family, Their Times, Caricatures and Portraits is still in print and remains the only detailed study of the artist’s life and work. Most of the items which were being offered up at the sale appeared in Padbury’s book and will therefore be familiar to anyone who’s read it. Nevertheless, I thought it worthy of re-posting the images from the sale catalogue here so that they remain freely accessible online for the foreseeable future.

Dighton occupies a marginal place in the history of eighteenth-century caricature. Most modern print-collectors probably associate him with the mezzotint drolls that were characteristic of Carington Bowles printshop during the 1780s, or else the decidedly

less interesting caricature portrait studies that formed the bulk of his output from around 1800 onward. However, he was also a prolific watercolourist and in this medium he undoubtedly excelled. His frenetic paintings of life in the streets around Covent Garden are arguably superior to similar works produced by Thomas Rowlandson (an assertion made by Kenneth Barker in the foreword to Padbury’s book) and the sale of paintings such as these may have accounted for a larger proportion of his income than that which he derived from his prints. The catalogue of known works that appears at the back of Padbury’s book certainly suggests that his output of paintings far exceeded his output of published works during the mid-1790s. He was also a well-known stage actor and singer, performing in such noted venues as

Sadler’s Wells Theatre and Vauxhall Gardens and may therefore have regarded the production of caricature engravings as a secondary form of employment.

Robert Dighton was born in London in late 1751. His father was a “paper-hanging-manufacturer” who may also have briefly dabbled in printselling and publishing (Padbury, p. 28). Dighton entered the Royal Academy School in 1770 and came to specialise in portraiture and conversation pieces, his style being heavily indebted to that of Hogarth, Laroon and Hamilton. His first published work appeared in 1776 and by 1781 he was regularly producing images for the printseller Carington Bowles. The connection with the Bowles family lasted until ‘droll’ mezzotints

finally fell out of fashion in the late 1790s, by which time Dighton was also regularly self-publishing his own satirical etchings on copper. His work was dominated by social satire of one kind or another, although he briefly strayed into political subjects during the tumultuous years of the early-to-middle 1790s. Most of these prints appear to have been self-published, perhaps indicating that Dighton was making enough money from his theatrical endeavours to cover his own production costs and could therefore dispense with the interference of a publisher. If Dighton’s finances were in rude health in the 1790s then the situation changed rapidly during the first decade of the nineteenth-century. In 1806 he was caught selling drawings by Rembrandt and other Old Masters that he had stolen from the reading rooms of the British Museum. He fled London in disgrace, washing up in Oxford where he scratched out a living engraving caricatures of provincial society figures and noted members of the university faculty. He eventually returned to London in 1810, publishing a small

number of prints before apparently becoming increasingly reliant on the work of his sons – Robert Junior and Denis – to support the family. He died at Spring Gardens and was buried at St Martin in the Fields on 13th June 1814.

Dighton’s background in portraiture means that it is not surprising that that Padbury’s collection contained a large number of caricature portrait studies. Many of these appear to be preparatory works for mezzotints that were published by Carington Bowles during the 1780s and copies of the engraved versions can be easily located using the British Museum’s recently revamped online catalogue.

Perhaps the most interesting of the portrait pieces is this signed pencil drawing of a family group done on laid paper with a 1797 watermark (which appears at the top of this article). Padbury notes that the likeness of the man at the centre of the group is similar to that of Dighton’s self-portrait of 1779 and that the lady on the lower right also bears a resemblance to a study of Dighton’s first wife Letitia (d.1778). By 1797, Dighton had been married three times and had at least six children who had lived beyond infancy. It’s therefore possible that this drawing was conceived as an extended

family portrait, showing the current members of Dighton’s family alongside the likenesses of his dead wives and children. A second family group – a signed watercolour of parents and a child in a garden which is dated 1811 (right) – was also sold. However, the likelihood is that this is a straight-forwardly commercial piece that Dighton was presumably commissioned to produce for the sitters.

Padbury’s collection contained preparatory studies for several of Dighton’s mezzotint ‘drolls’ which are illustrated in order below. The most recognisable of these is the original watercolour version of the Scottish plate from the triptych Geography Bewitched! (1797) but there were also original versions of the prints Intelligence on the Change of Ministry (c.1783), A Master Parson with a Good Living (c.1782-83), Youthful Sport (c.1783 – 84), Quarrelsome Taylors, or Two of a Trade seldom agree (c.1794 – 95) and The Harmony of Courtship / The Dischord of Matrimony (c.1796). There were also a number of watercolours that were either conceived as works in their own right or as preparatory drawings for prints that either weren’t published or for which no surviving copies can be found. These were the two small ovals entitled The Peep Show and A Lady Marketing (c.1780s) and the lively Term Time or the Lawyers Alive in Westminster Hall (c.1795). The latter was the single most expensive item of Padbury’s to appear in the sale and it achieved a final hammer price of £4,500. Finally, at the other end of the income scale, was an early rural landscape entitled The Village Well (c.1780) that fetched just £180. Which I guess goes to show that there’s more money in law than you’re likely to find at the bottom of a wishing well… 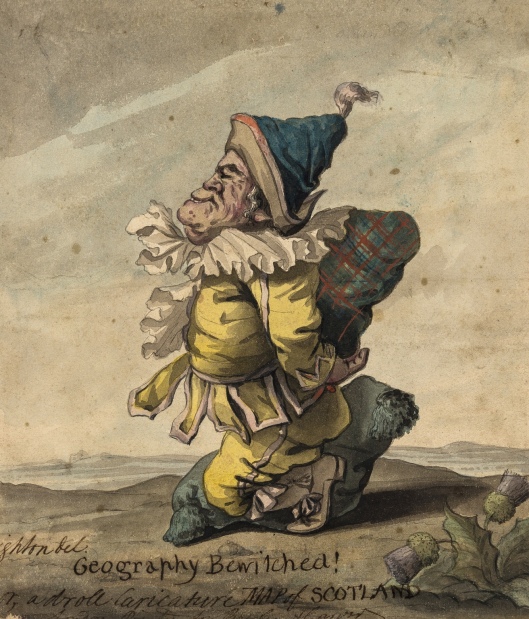 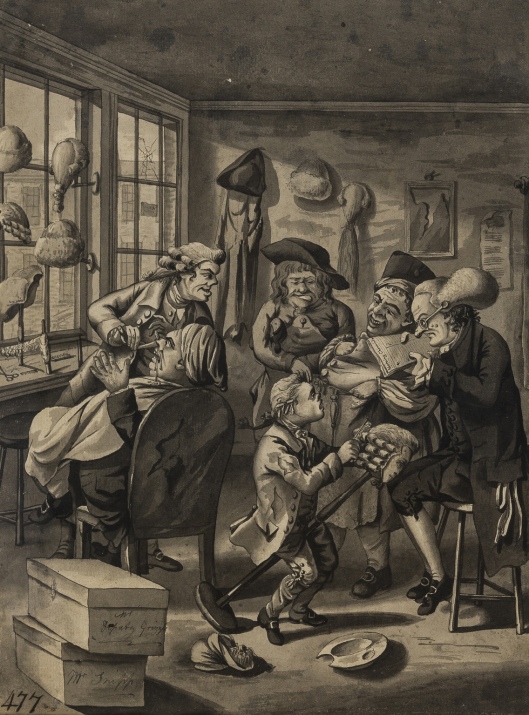 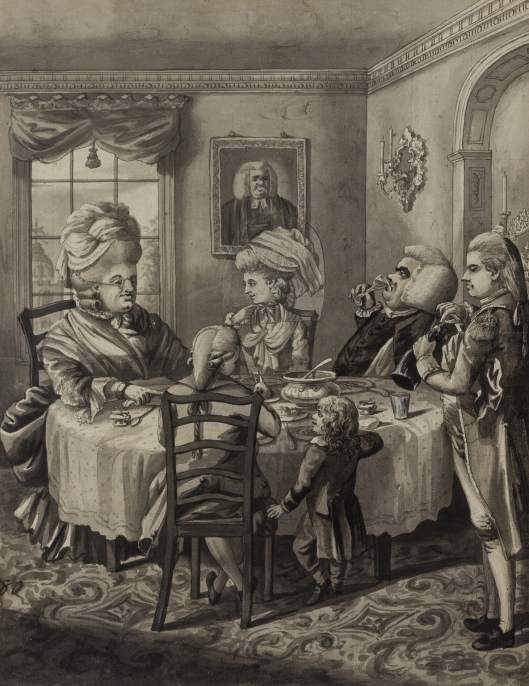 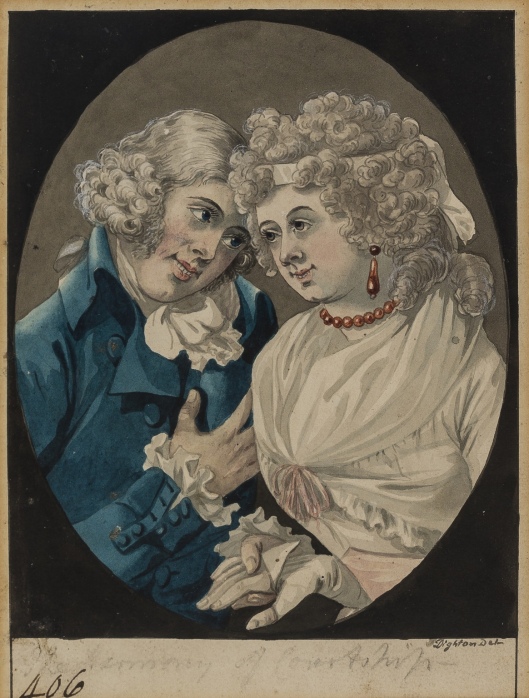 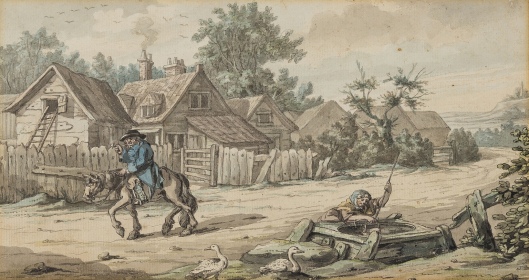