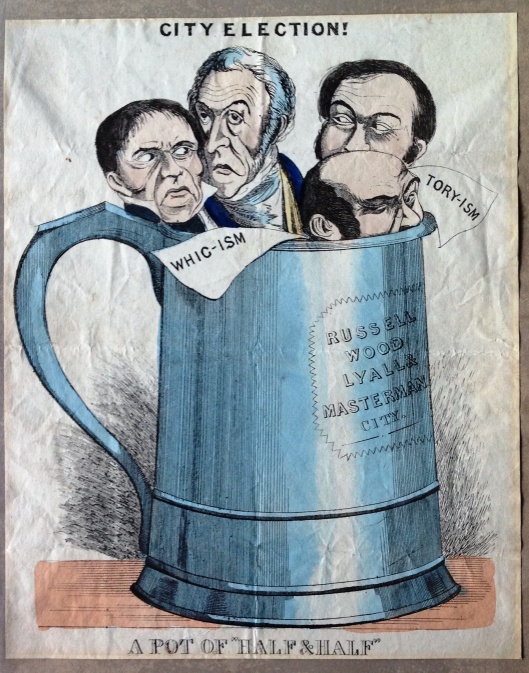 One of the nice things about collecting prints by C.J. Grant, or any less well-known artist for that matter, is that there’s always a much greater chance of coming across something that you’ve never seen before. Grant’s work was largely ignored for most of the twentieth-century and is not well represented in museum collections or studies of early nineteenth-century satirical publishing. This means that there’s still a comparatively large number of uncatalogued prints floating around out there for the private collector to find and that one has to try that little bit harder to work out what they’re about.

This print is a recent addition to my own fairly modest collection of Grant’s work. Admittedly I had seen another version of this print before, illustrated on page 88 of the catalogue for the 1998 C.J. Grant, A Radical Satirist Rediscovered exhibition at University College London. However that version was a lithograph, published by Glover & Co. of Water Lane, Fleet Street as plate no. 13 in the Glover’s Gallery of Comicalities series in June 1841, whereas mine is clearly a copperplate engraving. The two versions appear to be largely identical, save for the fact that Grant added his ‘CJG’ moniker to the lower left hand corner of the lithograph.

The publication line has been trimmed from my print, so we don’t know who published it or whether Grant’s name appeared on it or not. It’s possible that it was also published by Glover, intended to be sold as a stand-alone caricature which was not part of the Gallery of Comicalities series. Alternatively it may have been produced for another publisher. During the mid-1830s Grant had produced two different versions of his Political Drama series for the printsellers G. Drake and G.S. Tregear. Drake’s Political Dramas were woodcut engravings, printed on cheap paper and sold for a few pennies. Tregear’s on the other hand were lithographs which were printed on good quality paper with delicate hand colouring. Clearly the two editions were aimed at entirely different parts of the market and this presumably explains why the two publishers were happy for Grant to make copies of the plates for their respective rival. My guess is that something similar happened here, as the paper and relatively basic colouring of this print strongly hints at it being a print that was intended for mass circulation rather than a more rarefied audience of middle class print collectors.

The print is titled City Election! and refers to the election of candidates for the City of London during the 1841 General Election. Due to a quirk of history dating back to the creation of the parliamentary constituency at the end of the thirteenth-century, the City of London enjoyed the unique privilege of returning no less than 4 MPs to Parliament until 1885. In 1841 the City returned two Tory members, John Masterman and George Lyall, and two Whigs, Lord John Russell and Sir Matthew Wood. Grant shows all four crammed into a huge pewter tankard (l-r Lyall, Wood, Russell, Masterman). The sub-title A Pot of Half & Half refers to a beer cocktail – more commonly referred to as a Black & Tan today – which is made by pouring half a pint of porter onto a half print of beer. The lower density of the porter means that the two halves of the drink will not mix and remain entirely separate in the glass. Grant uses the drink as a metaphor for the adversarial nature of British politics and the unwillingness of the City’s representatives to cooperate with one another. A slightly more subtle interpretation of the print is that was intended as an attack on the political class as a whole; Grant is known to have been generally sympathetic to the Chartist cause and many of his prints display an even-handed disdain for mainstream politicians from both ends of the Parliamentary spectrum. By showing Whigs and Tories crammed together in the same pot, he may be trying to convey the message that the distinctions of party are irrelevant when it comes to their opposition to democratic reform and the enfranchisement of the working classes.