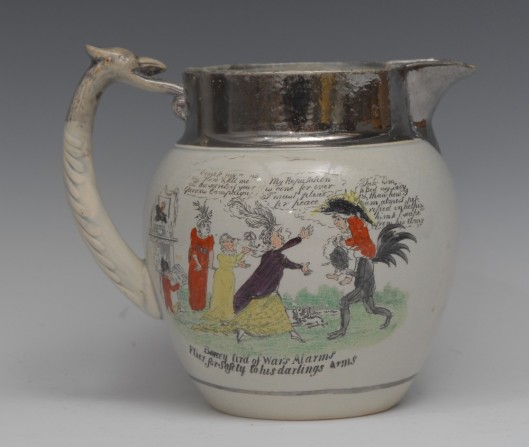 This rather bling pearlware silver lustre jug has been decorated with a transfer copy of George Cruikshank’s Boney tir’d of War’s Alarms, Flies for Safety to his darlings Arms, which was originally published by Knight & Walker of Sweetings Ally, Royal Exchange, in January 1813.

As always with caricature-related pottery, it’s interesting to see how the potter has modified the design in order to compensate for the dimensions of the vessel. In this case two of the characters – the infant King of Rome and his nursemaid – have been removed and the text has been shortened to ensure that the whole design fits onto one side of the pot.

The colouring has been applied in a rather slapdash and heavy-handed fashion which virtually obliterates the details of the design in some places. Most unusual of all is the use of green wash to denote the floor and background, which creates the impression that this is an exterior scene despite the rather obvious presence of the fire and chimney breast on the left. However the colour-scheme is broadly similar to the printed version and this suggests that the painter had either seen Cruikshank’s original or was at least working to instructions drawn up by somebody who had.

The image is one of a large number of caricatures on the subject of Napoleon’s retreat from Moscow which were published in England during 1813. The Devil is shown carrying the bedraggled Emperor back to Paris on his shoulders to be greeted by the hysterical Empress Maria Louise and her retinue. A monkey dressed in French military uniform and a red Jacobin bonnet sits by the fire reading a list of the revolting things that were eaten by starving soldiers as they marched back across Russia. Above him hangs a picture of a Cossack cavalryman symbolising the Russian army.