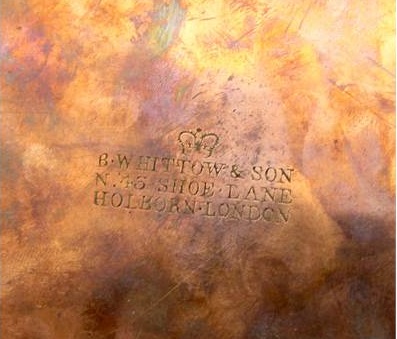 Copper manufacturing was an essential ancillary trade of the eighteenth-century publishing industry. Prior to the widespread introduction of lithography in Britain during the 1820s, the majority of printed images were produced by engraving onto a flat plate of polished copper. Contemporary publishers and printsellers often retained substantial stocks of engraved copperplates which could be reissued, loaned out or sold to competitors. Sadly many of these plates have been lost, having been melted down by later generations of engravers, or even seized for use in the munitions industry during the First and Second World Wars.

The plate shown here was produced by the firm of Benjamin Whittow sometime between 1785 and 1797. It is has the company hallmark stamped on the verso and has been engraved by Richard Carpenter of Aldgate, London (fl.1781 – 1830) with an image entitled A North View of the Principle Street of Stockton upon Tees. The plate measures 7 x 8 inches and was presumably engraved for use as a bookplate of some sort, although I have been unable to locate a surviving copy of the printed image.

Benjamin Whittow was one of London’s leading suppliers of engravers’ copperplates during the second half of the eighteenth-century. Whittow entered the trade as a boy, delivering plates for the copperplate-maker Francis Torond, before enlisting to fight in the navy and losing a leg in one of the naval engagements of the War of Austrian Succession (1740 – 48) [1]. A portrait of Whittow which appears on one of his early trade cards shows him with wooden leg, sat at his workbench beating out a plate (right and detail above).

Whittow established his own copperplate-making business sometime during the latter part of 1750, with a newspaper advertisement announcing that he had recently taken “a shop at the Castors in Great St Andrew’s Street, Seven Dials; where those gentlemen engravers, limners, painters & c. who are willing to favour me with their copper-plates, shall have their work done neat and clear” [2]. His trade cards would later describe him as a manufacturer and planisher of copper and brass plates for the use of engravers, painters and calico printers [3].

Whittow had moved to premises on Shoe Lane by 1763. He would subsequently issue a number of trade cards placing him at the following addresses on that street: “at the Crown in Shoe Lane, opposite the White Swan, near St Andrew’s church, Holborn” (1763 – 1774), 48 Shoe Lane (1774 – 1781), 43 Shoe Lane (1785 – 1797), 31 Shoe Lane (1796 – 1825) [4]. Records for the Sun Fire Office indicate that Whittow also owned premises at Briant Buildings, near Rosomans Row, Clerkenwell by 1777 for which he paid a premium of £300 per annum [5]. This is a relatively large sum and indicates that Briant’s Buildings was most likely the site on which the highly combustible business of smelting copper was carried out.

Whittow entered into partnership with a neighbouring coppersmith named Thomas Large during 1774, with both men initially retaining separate premises located at Nos. 48 and 75 Shoe Lane respectively [6]. The business had been consolidated at No. 48 Shoe Lane by 1776 and was trading under the name Whittow & Large [7]. Whittow & Large were declared bankrupt in 1781 and both proprietors were imprisoned until 1784 for non-payment of debts [8].

By January 1803, Whittow had formed a new partnership with George Harris, his son-in-law and former apprentice, and Thomas Large junior. Large’s involvement in the partnership appears to have been dissolved in April 1804, although he remained part of Whittow’s household and possibly continued to work as an employee of the firm. Benjamin Whittow died in November 1805 but his company would continue trading at 48 Shoe Lane under the name Whittow & Harris until George Harris’s death in 1825.

Whittow left his estate to Harris, subject to two small bequests of £5 to purchase mourning rings for “Thomas Large, son of Thomas Large, of St John’s Lane, West Smithfield, who now lives with me” and a Sarah Crosby, the daughter of an old comrade who had since passed away. He asked to be buried in the churchyard of St Andrew, Holborn, “as near to my old shipmate Thomas Crosby as may be but in the case that cannot be conveniently done then as near to Miss Jane Williams as may be”. Jane Williams was his daughter-in-law’s sister and had been crushed to death along with Whittow’s daughter in an accident the Haymarket Theatre in February 1794.

An account published several years after his death described Whittow as something of a bluff and cantankerous eccentric. “If engravers shewed a disposition to evade the payment of his bills, he used to write on a paper, stuck up in his shop, their names, sums owing, how long, and his own opinion on whether the accounts would ever be settled: an expedient which brought many a payment. This man – sailor-like – possessed intrepidity, integrity and good nature in a high degree.”

Benjamin Whittow is known to have supplied plates to several leading artists and printmakers, including Charles Turner, William Blake, Schiavonetti and John Barlow. Thomas Rowlandson used plates carrying Whittow’s markings to engrave Nap in Town / Nap in Country (1785) and The willing fair, or any way to please (n.d.) [the latter is undated but as the plate is embossed with a Whittow & Harris marker’s mark and the address 31 Shoe Lane, it was most likely engraved sometime after 1803.] Robert Dighton also used Whittow & Harris plates for the caricature portraits Francis Barnes – A view from Peter House, Cambridge, (1810) and Donald Macdonald, (1812). Dighton sometimes used the reverse side of his copper plates (the side impressed with the plate maker’s details), meaning that an imprint of plate maker’s details appears in reverse on each impression of the print.