Playing cards rank alongside hand-fans, snuff boxes and creamware pottery, in the list of ephemeral eighteenth-century items that were frequently decorated with satirical imagery. Packs of novelty playing cards would also doubtlessly have been among the many items which one could have purchased at any of the leading London printshops during this time.

Playing cards had first appeared in Europe during the 1400s, and had become sufficiently commonplace by the end of the 1600s to necessitate the production of more elaborately decorated packs which could be distinguished from those of a rival retailer. The public’s penchant for decorated cards was such that, by the start of the 1700s, the decoration often covered almost the entire surface of the front-face of the card. This trend seems to have been spurred on both by the general explosion in the quantities of printed imagery being applied to all manner of paper goods in the years after the lapsing of the Licensing Act in 1695, and also by changes in the way in which card games were being played. Eighteenth-century card players literally kept their cards close to their chest – preferring to use a single hand to hold their cards in a very tight fan. This style of playing meant that the suit and value of the card had to be distinguishable while only revealing a fraction of the card’s surface. The solution was to place this information in a small box at the upper left corner of the card, leaving the rest of it free for some other form of engraved decoration.

Satirical images appear to have been among the first decorative themes to appear on playing cards in England during the mid-seventeenth-century. This is not surprising, given that the hierarchical nature and courtly themes of card games so easily lends itself to the purposes of political satire. Studies of the history of card-playing also indicate that the very rules of the games which were being played could also be changed to provide a subtle form of political commentary. For example, it is said that the reordering of the value of aces, to replace kings as the highest value cards in the deck, coincided with the revolutions of the late eighteenth-century.

The cards shown here date to the first quarter of the eighteenth-century. Each one is decorated with an individual social satire on subjects ranging from young rakes, to gaming and the itinerant quack doctors that seem to have plagued the fairs of the English countryside. They were the surviving remnants of a deck of cards which was sold at auction in 2012. I forget how much they fetched at the time, but it would not be unusual to see them go for somewhere around £500. Their value being boosted by the fact that their appeal cuts across multiple areas of collecting interest. 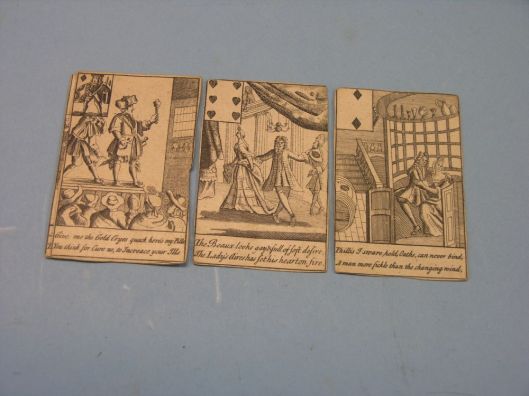