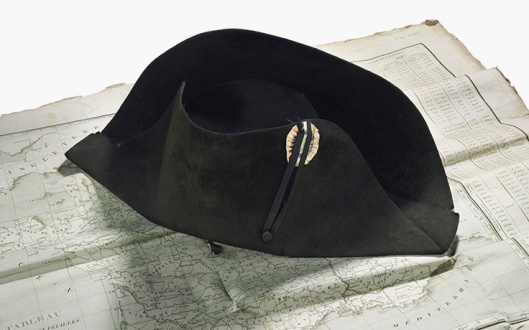 Okay, okay, I know that this is supposed to be a blog about eighteenth-century prints and not millinery, but I couldn’t resist posting something about the forthcoming sale of Napoleon Bonaparte’s hat at auction.

I guess that if I were searching desperately for some tenuous link to justify a post on this subject, then I would probably begin by pointing out that Napoleon’s hat actually played a fairly important role in helping to define the way in which English caricaturists sought to portray the Emperor. He was frequently depicted as sporting a huge bicorn which served to further highlight his diminutive stature and render him ridiculous in the eyes of the viewer. The hat was a key component of the “Little Boney” character developed by Gillray and many other British satirists from the late 1790s onwards.

This particular hat was one of 120 produced for Napoleon by the firm of Poupart & Cie in the Palais Royale. He wore it during the final battles of the War of the Fourth Coalition and it is known to have been on his head throughout the battles of Eylau and Friedland. It sustained some minor damage at Friedland, said to have been the result of a musket-ball passing dangerously close to the Emperor’s head, which prompted his valet to pass it to an uncle, the keeper of the Palace of Dresden, for safe keeping. It was then sold to a young Scottish nobleman named Sir Michael Shaw Stewart in 1814, who was touring Germany during the brief period of peace that followed Napoleon’s abdication and exile to Elba. He paid, so he wrote in his diary, 10 thalers, the equivalent of ‘two English guineas’, and brought it home to Ardgowan House on the Firth of Clyde near Inverkip in Scotland, where it has remained ever since.