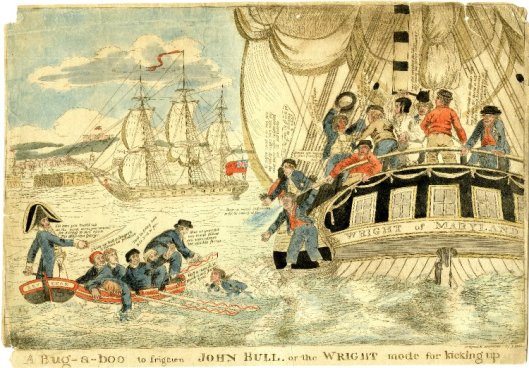 The period between the end of the American War of Independence and the outbreak of the War of 1812 coincided with a golden age of English satirical printmaking. The market for engraved prints offering a humorous or ironic view of high politics and the fashionable beau monde, exploded in the wake of the post-war economic boom of the 1780s. The outbreak of revolution in France in 1789, followed by the commencement of a European war to which Britain was to remain almost continually committed for a period of over twenty years, added further fuel to fire the demand for news and satirical commentary. The most visible and enduring symbol of the satirical print’s status as an item of commercial and cultural value in this period were the window displays of brightly coloured caricature prints which spring up across Britain during the final decades of the eighteenth-century. Nowhere was this trend more evident than in London, where crowds of people several ranks deep gathered outside the widows of the city’s leading printshops to gape and guffaw at the latest offerings from the likes of James Gillray, Thomas Rowlandson and Isaac Cruikshank.

The appeal of these prints was not limited to British audiences; many of London’s printshops exported their wares into Europe, the colonies and America. Little is known about the types or quantities of prints that were exported, but fragmentary evidence gathered from customs house records and other sources suggests in was substantial. The London newspaper the Morning Chronicle estimated in 1785 “that a balance of Thirty Thousand Pounds annually, in favour of this Kingdom, hath of many years arisen from the exportation of our Prints in general”. By 1805 another economic commentator estimated that the value of the overseas trade in prints had increased to £300,000, a figure which would equate to just a billion pounds in today’s terms. The presence of large numbers of British caricatures among contemporary American collections of prints, such as the Charles Pierce Collection, indicates that the United States of America was very much part of this international trade in humorous images.

While Americans had always been happy to purchase fine examples of British satirical art, they also hankered after satirical commentary of their own. British caricatures in this period were almost entirely indifferent to American events and the United States was mentioned in only a smattering of prints published in the thirty year inter-bellum period that followed the War of Independence. The first American caricaturist of note to emerge in this period was William Charles, a Scottish immigrant who arrived in America in 1807 and began publishing crude copies of English prints, as well as a few compositions of his own design. Charles’s style eventually matured and he hit his creative peak during the tumultuous years of the War of 1812, producing some of the most memorable and virulently anti-British caricature prints of that period. After the war he continued working as a staunchly pro-Republican political satirist, as well as a jobbing engraver and an illustrator of children’s literature. His life was cut tragically short in 1820 when he drowned in a boating accident on the Delaware River.

Another notable, although less well-known, American satirical artist from this period was James Akin of Newburyport in Massachusetts. Akin’s creativity and skills as a draughtsman undoubtedly exceeded those of William Charles but his adherence to the cause of Federalism and willingness to launch vicious satirical attacks on Thomas Jefferson and other leading Republican members of the founding generation diminished his achievements in the eyes of subsequent generations of American historians. His sudden and unexplained exit from a career in political satire sometime during 1811 also meant that he missed the sudden upsurge in popular interest in the medium which coincided with the War of 1812.

One of Akin’s most accomplished satirical prints was A Bug-a-boo to Frighten John Bull, or the Wright Mode for Kicking Up which was published anonymously sometime during 1806. The British Museum in London hold a copy of this print amongst its huge collection of eighteenth and nineteenth-century satires and the catalogue entry describes it as follows:

Apparently an American print. In the foreground is an American merchantman, the poop towards the spectator and crowded with men of un-nautical appearance; she is inscribed ‘Wright of Maryland’. A few yards off is a naval ship’s boat inscribed ‘Revenge’ in which a British officer, wearing a large cocked hat, stands, cutlass in hand, holding the tiller. There are six oarsmen. A man on the American vessel tipsily fires a pistol at the boat; the officer shouts: “I’ll have you tuck’d up at the yard Arm, you rascal for daring to fire upon His Majestys barge.” The man answers: “Damn you Majesty & your furbillo’d hat.” One of the sailors, apparently hit, hangs lifeless over the edge of the boat. One American seaman swims towards the British boat, saying, “60$ a month is worth a wet Jacket any time”; a sailor prepares to help him in, saying, “Give us your fist my brave fellow you were rather too nimble for us”. Two of the other British sailors say: “Dont be firing here & be D——d to you” and “I wish we had a Congress to Hansel us ye Dollars”. An American seaman is about to drop overboard; he says to the British sailors: “Bear a hand shipmates or I’ll be swamp’d too.” Behind him are a Negro and an Irishman; the former says: “Ki massa I grad fo go long you my nooung massa been read say inney paper massa Wright gwine gie me 200 Dollah.” The Irishman says: “Bie my sowl I’ll go wid ye for 60 dollarhs a munt.” One seaman seizes another, saying, “you shant go Nat sister Nabby will cry dreadfully if you be not to home.” The man pushes him off, saying, “Leave me be Ned our marchents wunt give me 60$ wages.” A third (with deformed hands) brandishes a saucepan, saying, “Rascals”, while a fourth says to him: “I say Old crooked knuckles why heave the skillet overboard?” On the extreme right the master of the vessel looks towards the British boat, saying, “You’d best make no difficulty with my people, for there’s a bill before Congress, to shoot every Englishman at 200$ pr head.” The sails form a background to the men. In the middle distance is a British man-of-war to which the barge belongs. Behind is a harbour with vessels at anchor, backed by the houses of a small port; behind are cliffs surmounted by a castle flying a British flag. c.1806

In addition the following note has been added to the online edition of the catalogue:

The date being uncertain the situation is obscure. ‘Wright’ is probably Robert Wright (1752-1826), senator, and Governor of Maryland, a strong Jeffersonian, who introduced a Bill in 1806 for the protection and indemnification of American seamen, and supported measures for the protection of American commerce and the prosecution of the War of 1812 with Great Britain. Desertion for higher pay was in general from British to American ships. The tension between the two countries was great and increased until the outbreak of war.

This description is partially correct but further supplementary research now allows us to throw further light on the origins and content of this print.

The origins of the design lay in the dispute between Britain and America over the practice of impressment. Impressment is an antiquated term for a practice which essentially amounted to the state-sanctioned kidnapping of individuals for forcible enrollment in the armed forces. The practice had been common in England during times of war since the 13th Century and as Britain’s naval power, and the size of her fleet, grew during the course of the 18th Century, it became an essential means of securing adequate manpower. The Royal Navy’s need for fresh sailors was constant, not least because the notoriously brutal conditions aboard ship, low rates of pay and persistent risk of being killed or wounded in action, ensured a constant stream of deserters, and naval press-gangs remained in operation throughout the Napoleonic Wars. Many Royal Navy deserters eventually found their way onto American merchant ships, whose captains paid them well and treated them as valued employees rather than deck-swabbing cannon-fodder. The Royal Navy’s response to this threat to her manpower was simple – Her captains were empowered to board American ships at will, search them, and remove any man they suspected of being a British subject. This inevitably led to many hundreds and possibly even thousands, of American citizens being taken against their will and forced to fight aboard Royal Navy ships. Although consular officials could and did wage a constant campaign to recover wrongfully impressed Americans from the bowels of Royal Navy ships, securing the release of sailors trapped on ships serving in remote stations could take years. The issue was to remain an open sore in Anglo-American relations for decades and would eventually constitute one of the main justifications for the US declaration of war against Britain in June 1812.

In January 1806, a hawkish Republican senator named Robert Wright put forward his own radical solution to the problem of impressment. Wright brought forward a bill “for the protection and indemnification of American seamen” which not only guaranteed American captains immunity from prosecution if they used force to repel a British boarding party, but actively encouraged them to do so by offering a $200 bounty to the crew of any ship who successfully saw off the Royal Navy. Furthermore, any American sailor who was wrongfully pressed into British service would qualify for a generous government compensation payment equivalent to $60 for every month they were forced to work aboard a British ship.

Akin’s print reflects the view of Federalist opponents of the bill, who argued that such large compensation payments would merely serve to reverse the flow of deserters passing between the two nation’s fleets. They also pointed out the undoubted folly of

holding out financial inducements to encourage ill-equipped merchant vessels to engage in provocative and confrontational behaviour with heavily armed Royal Navy cruisers. Akin therefore presents the viewer with a preposterous scene in which the ragtag crew of a fictional merchant vessel – the ‘Wright of Maryland’- scramble to confront a British frigate. The crew members are torn between those determined to engage the British in a suicidal ship-on-ship engagement, and others who leap, lemming-like, over the side in the hopes of being press-ganged into the enemy’s service.

The presence of the skillet-wielding figure on the deck of the American vessel can be used to attribute the print to James Akin (detail above right). The figure is a caricature 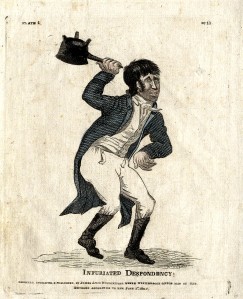 of Edmund M. Blunt, a Newburyport published with whom Akin had quarreled over unpaid debts and who was mocked mercilessly by the satirist in a number of prints published during late 1805 and early 1806. Blunt is depicted in all of these prints with the same grimacing expression, crooked fingers and is always waving a frying pan over his head. This is a reference to an incidence which had occurred on 27th October 1804, when Blunt had hurled a cast iron skillet at Akin during an argument in a local hardware store.

This may have been one of the last prints that Akin produced before he left Newburyport in October 1807 and returned to his native Philadelphia. He certainly is not known to have produced any more caricatures featuring Blunt after this period, and by 1808 he had begun a new and equally caustic feud with a Philadelphia bookseller called Richard Folwell. Akin appears to have abandoned satirical print-making altogether by 1811 and disappears from the Philadelphia trade directory entirely after 1819.

[N.B. This post originally appeared on the old Blogger version of the Printshop Window. As that site has now closed, I will be re-posting some old content from time to time over the next few weeks].