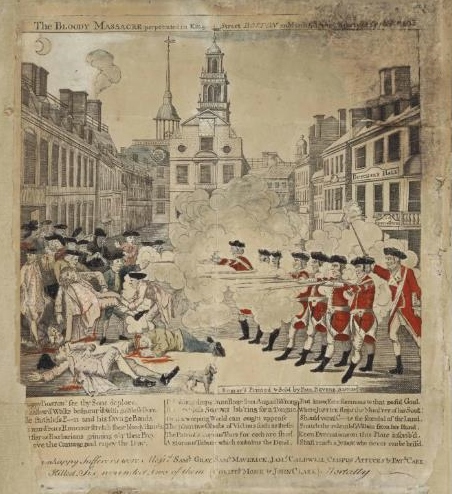 I’m pretty sure that every print collector has a ‘bucket list’ of special items that they would gladly sell their own grandmother to get hold of. I certainly have and somewhere near the top of that list is Paul Revere’s Bloody Massacre… of 1770. This print is probably the most iconic contemporary image of the American Revolution and undoubtedly ranks as one of the most important satirical prints published during the course of the eighteenth-century.

Surviving copies are extremely rare and usually confined to museum collections. Instances of privately-owned copies appearing on the open market are few and far between and will usually generate the sort of prices that one would expect to see in a luxury car dealership. The copy shown here is due to go under the hammer at Christies next month and has an estimate of $40,000 to $60,000. Personally, I think this is a conservative estimate and that the print will probably go for a lot more. I wouldn’t be surprised if the final hammer price is somewhere nearer to the $100,000 that was achieved on another copy of The Bloody Massacre sold at Bonhams New York salerooms last year. The ability to command prices such as these make this one of the most valuable eighteenth-century satirical prints that one can own. It’s market value dwarfs that of the most expensive British print sold to date – the copy of James Gillray’s Plum Pudding in Danger, which went for the comparatively paltry sum of £12,500 ($19,500) back in 2003.

The history of the events portrayed in the print will be familiar to most of you – On the evening of 5th March 1770, a group of young men and boys began harassing a British sentry who had been posted outside the Customs House in Boston. An argument ensued and resulted in the British soldier striking a member of the crowd 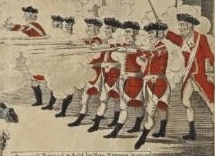 with the butt of his musket. An alarm was raised, more Bostonians began flooding into King Street and the mood of the crowd grew ugly. Hearing of the incident, a small party of British soldiers who were stationed in a nearby guardhouse turned out to come to their colleague’s aid. The sight of more redcoats on Boston’s streets further inflamed the townsfolk, who began to pelt the troops with stones, sticks and snowballs, and daring them to retaliate. A shot was fired, accidentally discharged from the musket of a soldier who had been felled by a missile from the crowd, someone shouted “Damn you, fire!” and the soldiers unleashed a ragged volley into the crowd. When the smoke finally cleared, five Americans lay dead.

As the title implies, The Bloody Massacre… was a blatant piece of American propaganda. No mention is made of the fact that the crowd had been throwing missiles at the British soldiers before they opened fire, or that a number of Americans had attacked them with clubs once the shooting had started. The size of the mob has also been reduced by about two-thirds in order to make it seem less threatening to the small party of soldiers.

The British troops are drawn up in battle formation and the musket of a sniper can be seen firing from the upstairs window of a nearby building, strongly hinting that this was a premeditated attack on the citizens of Boston. Perhaps the most cynical change of all was the decision to remove black faces from the crowd, including that of Crispus Attucks who had been killed when the British opened fire. This was presumably done in order to reduce the risk of sympathy for the patriot cause being undermined by the unease that many white American viewers would have felt at the prospect of free blacks openly confronting the representatives of white authority.

Paul Revere was a jobbing engraver who had been intermittently producing satirical prints on the dispute between Britain and her American colonies since the mid-1760s. He wasn’t a skilled artist in his own right but he had an eye for propaganda and proved to be adept at copying the works of others for use by the patriot cause. He famously took the design for The Bloody Massacre from a drawing which had been lent to him by the American artist Henry Pelham. Pelham had been planning to publish the design himself but Revere beat him to it, provoking the following outraged response:

When I heard that you were cutting a plate of the late Murder, I thought it impossible, as I knew you was not capable of doing it unless you coppied it from mine and as I thought I had entrusted it in the hands of a person who had more regard to the dictates of Honour and Justice than to take the undue advantage you have done of the confidence and Trust I reposed in you.

But I find I was mistaken, and after being at the great Trouble and Expence of making a design paying for paper, printing &c, find myself in the most ungenerous Manner deprived, not only of any proposed Advantage, but even of the expence I have been at, as truly as if you had plundered me on the highway.

If you are insensible of the Dishonour you have brought on yourself by this Act, the World will not be so. However, I leave you to reflect upon and consider of one of the most dishonorable Actions you could well be guilty of.

Revere’s engraving was advertised for sale in the March 26th editions of the Boston Evening Post and the Boston Gazette: “a Print, containing a Representation of the late horrid Massacre in King-street.” Two days later Revere noted in his Day Book that he paid the printers Edes & Gill to produce 200 impressions (giving some indication of the relatively small size of potential market for satirical prints in America during this period). The plate was printed onto good quality laid paper which carries a Strasbourg Lilly watermark and the initials LVG, denoting that it was produced by the papermaking firm of Lobertus van Gerrevink of Holland. Pelham’s edition of the design was issued a week later, and was followed in turn by a copy after Revere by the Newburyport engraver Jonathan Mulliken. At least one copy was also published in London by William Bingley of Newgate Street, although the catalogue entry in the British Museum suggests that this was taken from Pelham’s edition rather than Revere’s.