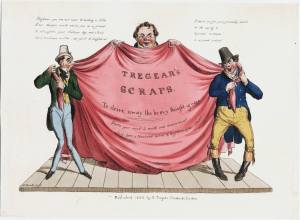 This post is the first in a short series of articles by Mike and Daphne Tregear on the life and works of their ancestor; the publisher and printseller Gabriel Shire Tregear (c.1801 – 1841). The illustrations attached to this article are taken from the extensive collection of Tregear’s prints which Mike and Daphne have amassed over the course of the last twenty years and include a number of extremely rare items.

Gabriel Shire Tregear died in 1841 having published hundreds of prints as singly-issued sheets.  While there were ‘one-off’ topics among these sheets, particularly political caricatures published before the Reform Act was passed in 1832, the output during the 1830s included many series of single sheets with the same title numbered consecutively. Presumably Tregear was hoping to generate repeat custom with this practice. The series included ‘Flights of Humour’, ‘Comic Sketches’, ‘Laughing made Easy’, ‘The Odd Volume’, ‘Fancy Sketches’, ‘Flowers of Ugliness’, ‘Sea Songs’, ‘School of Design’, ‘Humorous Sketches’, ‘Merry Thoughts’, ‘Flowers of Loveliness’, ‘Life in Philadelphia’ and ‘Black Jokes’, and the series which is discussed here, ‘Rum Jokes’.

The ‘Rum Jokes’ series of prints has 43 as the highest number which the authors have been able to find. The series started as

‘Tregear’s Rum Jokers’ which is used for the first (right) and second only, after which they are consistently named ‘Rum Jokes’. The topics are split almost evenly between those which are hunting-, shooting-, and fishing-related and those which cover other topics including racing events, skating, billiards and the building trade. None of the prints has a named illustrator or printer but there is clearly more than one hand involved in the designs over the period that the prints are published. None of them bear a date, but it is worth noting that all of the ‘Rum Jokes’ were published during Tregear’s lifetime and none was ever reissued by Tregear and Lewis (his widow Ann Tregear, in partnership with Thomas Crump Lewis, carried on the business after Gabriel’s death until they fell out, spectacularly, in 1844).

While some have an image illustrating a play on words, e.g. no. 4 ‘Twine Gentle Evergreen, A Catch’ which has a black man caught against the trunk of a tree by a large snake, others are simple observations of daily life. So, for example, no. 27 shows a male skater falling backwards though a hole in the ice while young women stand on the bank and observe. The caption is ‘Infernal hole just as I was shewing them Gals how I could do it’.

For a short run of prints, all related to hunting with horses (nos. 7, 8, 10 and 11, see the example to the left), there is a secondary title close to the image of ‘Billy Blow’d’ while the caption below the image starts ‘I’m Blow’d’.

Tregear brought these prints out in two grades, hand-coloured and plain, which was typical of this time in print publishing. When they have been coloured the print is on a fairly good quality stiff paper, whereas the plain are on softer, thinner, yellow or pink paper. They were all lithographs. The authors have failed to find any advertisements for ‘Rum Jokes’ as yet, but ‘Flights of Humour’ which overlapped the former’s publication sequence were advertised as 6 pence plain and 1 shilling coloured. ‘Rum Jokes’ are typical of the cheap end of the market with no detail drawn which is superfluous to getting the joke across; there is none of the carefully drawn background that one would find in, say, a Thomas McLean print.

For the most part the characters and the subject of the prints are stock figures. The inexperienced rider, the city clerk in his shooting attire and the country bumpkin in his smock are all represented. However in a few cases a historical figure can be identified. In no.10 the image is captioned by the the phrase ‘I’m blowed if they think I’m Ducrow’. Ducrow was a famous equestrian who in 1824 took over the management of Phillip Astley’s Amphitheatre where large scale and impressive dramas like Mazeppa were staged. Needless to say the rider in the print is clearly not in control of his horse.

On number 37 (right), which is only one of two prints in the series which have an overtly political flavour, there is the scene of 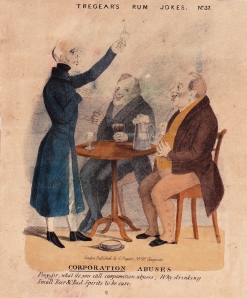 three men standing or sitting around a table in a tavern. Each is smoking a long stemmed clay pipe and drinking from a glass or tankard. The man standing is holding a large key aloft. Below the image the caption is:

Corporation Abuses. Pray Sir, what do you call corporation abuses, Why drinking Small Beer and Bad Spirits to be sure.

Smug and contented, holding the key to the local authority treasury, our three representatives are shown living a good life at the expense of the local tax payer. In 1833, after years of pressure from electors up and down the country, the House of Commons sets up a Select Committee to investigate and consider the abuses of power and the use of local tax revenues by local corporations. One of the many acknowledged abuses was the regular use of funds to hold banquets and feasts. As a result of the enquiry the Corporation Act of 1835 is passed. This print is part of the public debate prior to the setting up of the committee.

On number 38 (left) the names of Clay and Lushington are used.  The caption is ‘Independent Electors.’ which goes on to read as a conversation between two dustmen as ‘I say Bob who does you vote for, Vy I votes for Clay and I votes for Lushington’. These two men were elected to Parliament in 1832 as members for the then newly created constituency of Tower Hamlets. Sir William Clay was a Liberal who represented this seat from 1832 to 1868. Stephen Lushington was a radical and known anti-slavery activist who represented the constituency until 1841.

It is rare for Tregear to use material more than once in his publications. However in the case of no. 23 (right) he has taken one part of a much larger and complicated print and used it as the sole image for the print. The print is titled ‘The celebrated old horse Blister 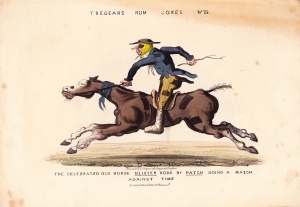 rode by Patch doing a match against time’ (below). It shows a rider with very heavily patched coat and trousers, his stirruped leg bound in bandages and a patch over one eye riding an equally decrepit horse. The larger print is ‘A Regular Out and Out Steeple Chase’ which is a parody of professional steeple chasing circles in that the riders are all poorly dressed trades and working men while the horses are nags. This print is dated April 1833.

The double entendre in the title of these jokes was also intended to bring a wry smile to the lips and alert the purchaser to its contents. The Oxford English Dictionary lists ‘rum’ as originally a cant term meaning good, high quality, excellent, extraordinary, great. This meaning dated back to the sixteenth century. In the late eighteenth century  ‘rum’ acquired an opposite colloquial meaning of odd, strange and also bad, spurious, suspect. Dickens used the term in Pickwick Papers: ‘There’s rummer things than women in this world though, mind you’. So, Tregear used a ‘wicked’ title for some jokes!

There may well be more ‘Rum Jokes’ past number 43 which have yet to be identified. Any information on these, or those missing numbers below 43, would be gratefully received.

Below are short titles for ‘Rum Jokes’: